Canada’s Emily Batty won the bronze medal in the Elite women’s cross-country on Saturday at the Mountain Bike World Championships in Lenzerheide, Switzerland. She was joined in the top ten by Haley Smith in sixth, with Catharine Pendrel (Kamloops, BC) finishing 14th after suffering a flat tire while in the top ten. In the Elite men’s competition, Leandre Bouchard was the top Canadian, in 26th place.

The women’s race began with an attack by 2016 world champion Annika Langvad of Denmark, who opened a gap on American Kate Courtney and Batty. However, Courtney dropped Batty on the fourth lap and caught Langvad, pulling away on the final lap to win by 47 seconds. Batty hung on for third behind a fast closing Jolanda Neff of Switzerland. 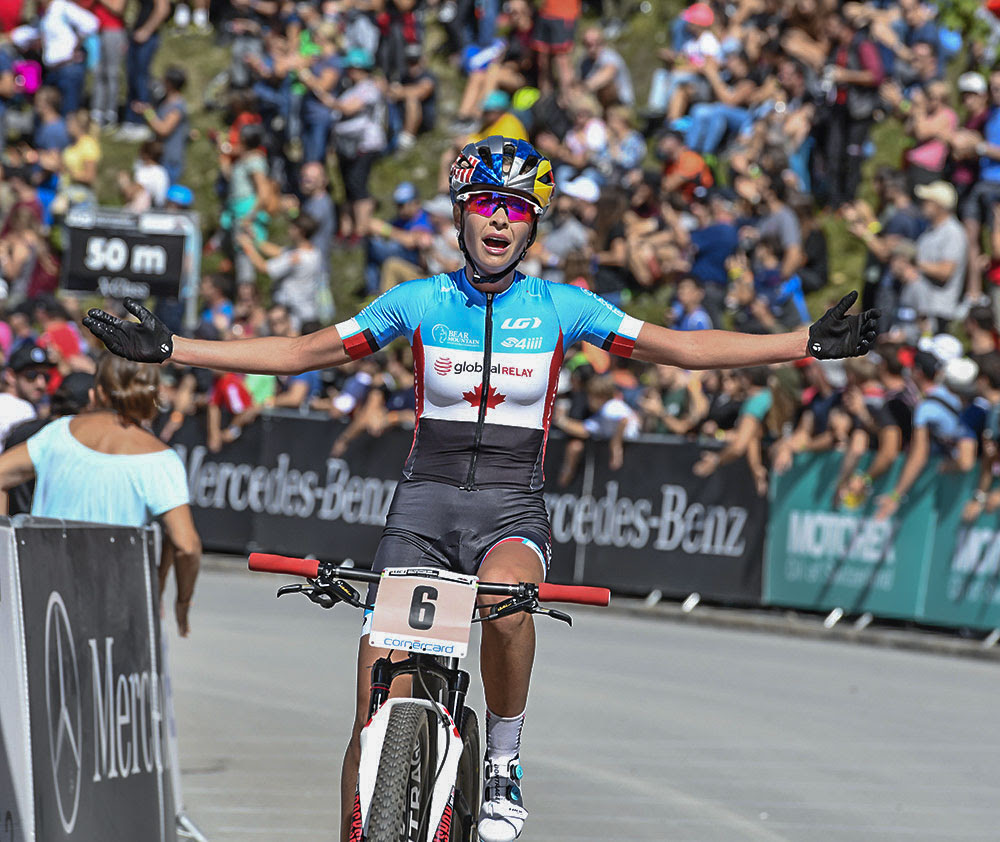 “I’m so proud,” said Batty. “When I was racing, I knew that there was no way I was going to walk away without a medal. I found my limit; I’ve never gone as hard as today. That was my goal: to turn myself inside out, and leave it all out there. We [Batty and Courtney] did get a good gap from behind early in the race, and I just tried to hold that. I feel like I’m just starting to grow into my potential.”

Smith moved up into 12th by the third lap and was tenth a lap later. By Lap 5 she was into sixth, and on the seventh and final lap moved past Maja Wloszczowska of Poland into fifth, before crashing and losing a spot.

“I don’t really know what to say,” admitted Smith. “This kind of thing doesn’t feel real until it happens. I’m just really excited and grateful for the whole journey this year, and I’m excited to keep working for more. I got a by few people on the first lap, and then I was just picking them off one at a time. I got up to fifth with a good gap, and then I tried to rail a section hard and clipped a stake, and crashed. It’s my own fault from a silly mistake, but I’m still happy with sixth.” 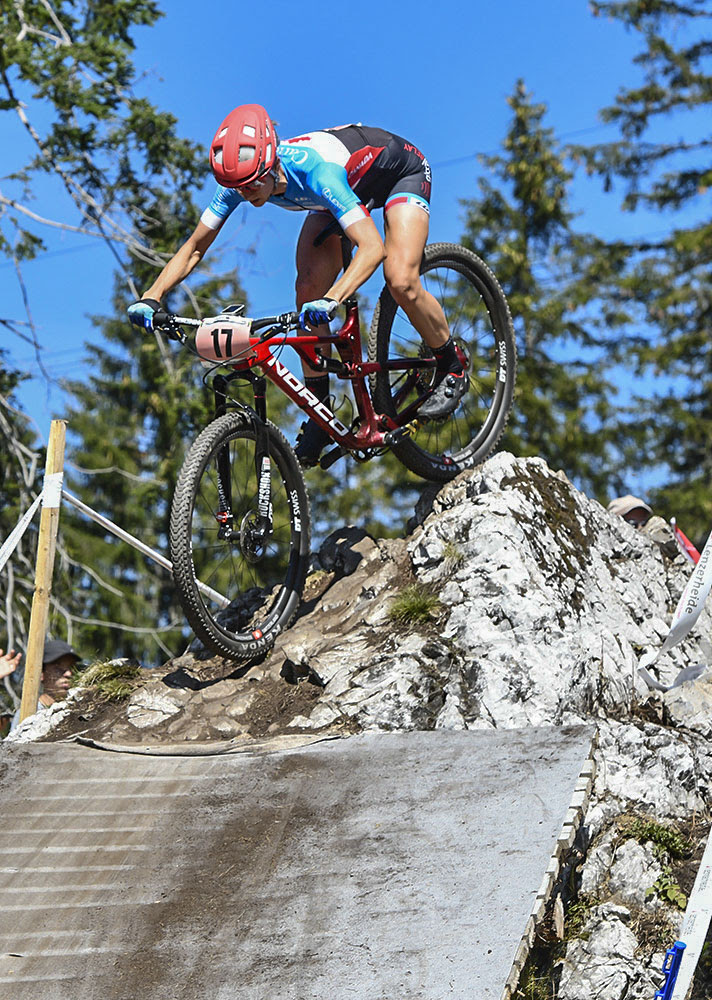 Catharine Pendrel, starting back on the fourth row, had a strong start and was in the top ten by the second lap. She was joined by Smith on Lap 4, who passed her, but Pendrel was still in good shape for a top ten until a lap and a half to go, when she suffered a flat tire. Pendrel is still coming back from a mid-season broken arm.

In other Canadian results, Sandra Walter (Coquitlam, BC) finished 21st, after riding in the top-20 for most of the race, Cindy Montambault was 31st, Elyse Nieuwold was 38th, and Catherine Fleury was 42nd.

Dan Proulx, National Mountain Bike Coach, said, “I’m very pleased with the Team’s performances this week. Our goal is to create an environment where champions are inevitable and each year we’re moving closer to that. Without a doubt the ride of the week was Emily’s Bronze medal. Her ride capped an amazing season – her best so far. I know she’ll be hungrier than ever to win this one next year.”

“Haley Smith deserves a huge congrats on her sixth place ride. Two years ago, her best finish in Elite was 42nd. She’s come through the ranks quickly and consistently – starting 2018 with a Bronze at Commonwealth Games. Her work ethic and determination are incredible and I’m confident that this is just a stepping stone to future success.”

Source: Cycling Canada
About Cycling Canada
Cycling Canada is the governing body for competitive cycling in Canada. With the vision of becoming a leading competitive cycling nation, Cycling Canada manages the High Performance team, hosts national and international events and administers programs to promote and grow cycling across the country. Cycling Canada programs are made possible through the support of its valued corporate partners – Global Relay, Lexus Canada, Mattamy Homes, Louis Garneau, lululemon, 4iiii, Argon18 and Bear Mountain Resort – along with the Government of Canada, Own The Podium, the Canadian Olympic Committee and the Canadian Paralympic Committee.